How to Protect against Denial of Service Attacks

When a DDoS attack hits your server, your basic security systems fail to respond, which leads to down your website for hours. Meanwhile, you can lose a tremendous amount of revenue, even the visitors of your website can find the alternate. Before DDoS attacks your website, you must know how to protect against denial of service attacks.

The worst denial of service attack until now was distributed in a single weekend, which pulled down the most important internet services of the world. The New York Times, Twitter, PayPal, and Reddit were some websites under the attack which went down for hours. In this post, we shall discuss DDoS attacks and some DDoS attack prevention tools.

What is DDoS Attack?

It stands for Distributed Denial of Service, which is a form of a cyberattack that hits the critical systems to interrupt the network connectivity. The disruption in-network service causes a denial of all the services for users of the targeted resource. A single DDoS attack is consists of the processing power of several malware-infected systems to target a single computer. 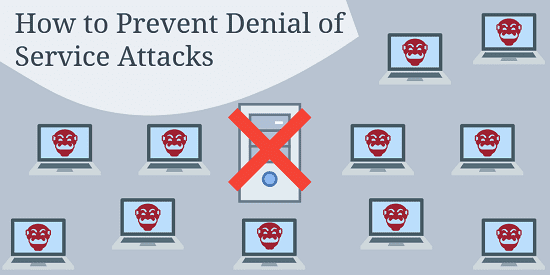 There are three types of Denial of Service Attacks:

You should know that the application-layer is not only the topmost layer of any OSI network but also the closest layer to the user interaction with the system. An application-layer targets the direct web traffic in which possible way can include DNS, HTTPS, SMTP, or HTTP.

These attacks are not easy to detect as they use a fewer number of machines to generate the attack, sometimes they use only one device. Therefore, the server could not identify the attack and takes it as legitimate traffic in higher volume than regular traffic.

It is the most common DDoS attack which targets the network bandwidth of a system and overloads it with illegitimate data requests on every open port. As the data flood the machine’s ports, it has no space to accept the legitimate traffic and results in the crashing of the website.

This type of attack targets the connection tables in the different areas of the network, which directly deals with verifying connections. A protocol attack can also damage a firewall. That is why a firewall is not enough to stop any DDoS attack.

You can develop a Denial of Service response plan based on a thorough protection assessment. A large company may need multiple teams to establish this prevention plan with complex infrastructure. There is no time to think about the best steps to take when a DDoS attack occurs, but it is better to build a plan in advance that enables prompt reactions and prevent any impact of the attack.

Underlying network security may not be able to protect your server from DDoS attacks but act as the foundation of a secure network. Basic security can include resetting the passwords regularly, secured firewalls, and anti-phishing methods.

There are some signs which can be a warning of DDoS attack like intermittent site shutdowns, network slowdown, and spotted connectivity on the intranet of a company. If you are facing these kinds of issues, it’s time to take action against the attack.

You can only prevent these types of attacks by adopting the multi-level security strategies in the right place. Generally, standard network equipment offers you limited security options against DDoS attacks. That is why you need to add some additional services to ensure robust security. You can access advanced and excellent protection against these attacks through cloud-based services on pay-per-use criteria.

Cloud-based services offer you multiple advantages to mitigate the DDoS attacks. Mainly it has two advantages; firstly, it has more resources and bandwidth than a private network. Second, the nature of the cloud is a diffuse resource that absorbs all the malicious traffic before it reaches the intended location.

Maintaining a secure network architecture plays a vital role in securing a server. An organization should develop a reductant network as when one is attacked; then the other can handle the legit traffic. A company should locate its servers in different places geographically as a spread-out resource is more difficult to attack.

You should always be ready for a DDoS attack by adopting the method mentioned above. Or, if you are unable to practice the same, you can also hire a famous company like Cwatch that does these types of jobs for you.