What is a DDoS Attack (Distributed Denial of Service Attack)

What is a DDoS Attack and How Does it Work?

A Distributed Denial of Service (DDoS) attack is an attempt made to crush an online system or a web server by overwhelming it with data. The reason behind a DDoS attack could be revenge, a simple mischief or hacktivism. These attacks can range from a minor annoyance to long-term downtime resulting in business loss.

1. SYN FloodThis type of DDoS attack exploits a known weakness in the TCP connection sequence (the three-way handshake), in which a SYN request to initiate a TCP connection along with a host will have to be answered by a SYN-ACK response from that host. This should then be confirmed by an ACK response from the requester. In a SYN flood scenario, multiple SYN requests are sent by the requester, but either does not respond to the host’s SYN-ACK response or sends the SYN requests from a spoofed IP address. However, the host system continues to wait for credit for each of the requests, binding resources till no new connections can be made, and eventually resulting in denial of service. 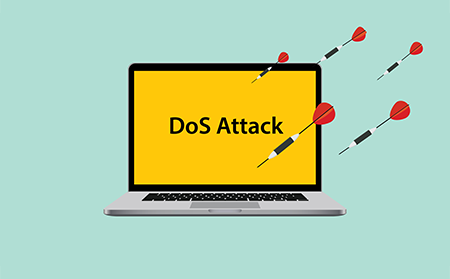 2. UDP FloodsA UDP flood is a type of DDoS attack that floods a target with User Datagram Protocol (UDP) packets. This attack aims at flooding random ports on a remote host. This causes the host to repetitively check for the application listening at that port and reply with an ICMP ‘Destination Unreachable’ packet when no application is found. This process saps host resources, which can eventually lead to inaccessibility.

3. Ping of DeathIn a ping of death (POD) attack, the attacker sends multiple malformed or malicious pings to a computer. An IP packet’s maximum packet length is 65,535 bytes. However, the Data Link Layer generally poses restrictions to the maximum frame size, for instance, 1500 bytes over an Ethernet network. In this situation, a huge IP packet is divided across multiple IP packets (called fragments), and the recipient host reassembles the IP fragments into the complete packet. In a Ping of Death scenario, after a malicious manipulation of fragment content, the recipient gets with an IP packet which is bigger than 65,535 bytes when reassembled. This can result in overflow of memory buffers allocated for the packet, causing denial of service for genuine packets.

4. SlowlorisThis is a highly-targeted DDoS attack allowing one web server to take down another server, without disturbing other services or ports on the target network. This is achieved by holding as many connections as possible to the target web server open for a very long time. It achieves this by developing connections to the target server but sends just a partial request. Slowloris continuously sends more HTTP headers, but never actually completes a request. The targeted server keeps all these false connections open. This ultimately overflows the maximum concurrent connection pool, and results in denial of extra connections from genuine clients.

You can prevent DDoS attack through manual security planning, however, it could be much more time consuming and easier if you have your own DDoS prevention tool. This should be considered because DDoS attacks can take place anytime.

As an efficient solution to prevent DDoS attack, cWatch is one big web security bundle that once installed will be able to successfully remove all types of attacks and also prevent any planned ones. Let’s take a look at the key features offered by the Comodo cWatch Web.